Today I was reading an article on a website called Vox that was about the “Positive Body Image” and “self Love” movement. It was really interesting because it seems like 99% of people out there today are all for it. This one, however, was not. The author, Amanda Mull, explained how companies have been promoting campaigns that are inclusive to all shapes, sizes, weights, etc. in their advertisements, but fail to offer actual clothing in those sizes.

I hadn’t caught this yet, and I like to think of myself as somewhat well-rounded with brands that include larger sizes. She mentions Everlane, a brand popular for its underwear line, who featured a “plus size” model in an ad but doesn’t even actually include that size in it’s new line…what the heck? This stuff makes me want to scream, “What’s the point fashion?!!” Ads like that are just sewing false hope in a society that is already so hungry for acceptance and inclusiveness. I don’t think it’s just limited to women either, I don’t know that I have ever, EVER seen a model with a ‘dad-bod’ in any men’s section, ad, magazine, etc. Ever. Never. I’m sorry, but I feel like the gene pool would be drastically different if the majority of the population actually fit the people depicted in these ads. Babies would probably be born with six packs or something.

Not only do the available sizes match the image they are promoting, but even their ‘plus size’ models are picked with very specific guidelines. I get so frustrated that the women walking runways, hailed as heroes for being bigger than the average models, still have the “ideal” body shape! These women are beautiful, don’t get me wrong, but I still don’t see a single model out there that has hip dips like me. I don’t need that for confirmation that our culture is changing, I think getting our culture acclimated to more average looking models is huge. I applaud them putting pictures up without refinishing or photoshopping. The problem is that it shouldn’t stop there. It shouldn’t be just the hour glass shapes up there, it shouldn’t make girls who are in size tens and twelves think they’re “big”.

For example, check out this ad from Calvin Klein: 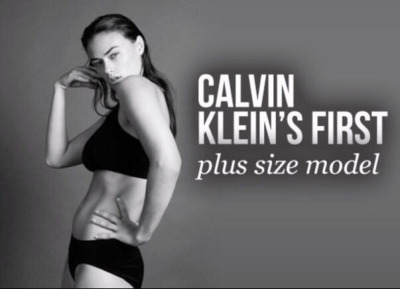 If you didn’t already see it or guess it, Twitter had a friggin’ field day with this one and it was welllllll worth it. Plus size? I look like that in top fight shape! People are erupting over this picture. Okay, so maybe she had breakfast this morning, (unlike the Victoria Secret models who have been rumored to starve and only sip black coffee for a day or more before a runway show) but she’s still WAY smaller than all of the people I see in public on a daily basis. This isn’t plus size, it’s simply a healthier size. C’mon Calvin, we can do better than this!

I love me some Ashley Graham. That girl is fierce and you can practically smell the confidence radiating off her freshly printed face in any magazine. She’s awesome, and she owns her size and all of her imperfections, and some have referred to her as the first, most successful plus-size model in the industry. But I want to point out one thing.. 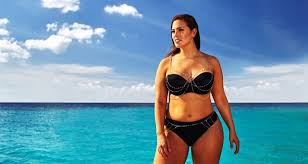 She’s smoking hot, and I am in no way dissing her or anything like that, but her shape is still that “desirable” figure. I won’t ever have a figure like that, and I know millions of other women won’t either. She represents a huge category of wonderful, beautiful women, but I would really love to see some different shapes than just the hourglass figure. It’s easy to look good in almost anything when you have those proportional curves, but what about those of us who are not proportionate? I hold on to her message of empowerment for young women, and hope that her efforts really seep into the minds and hearts of the designers powering the fashion industry. We have to have all shapes, and ALL sizes included, or it’s still just shallow effort that changes nothing.

I applaud the companies and models that are working hard to change the norm for fashion advertising. But let’s not settle for just some pretty, bigger girls in magazines. Let’s push for deep, true change where companies are held accountable for their claims and women of all shapes and sizes and backgrounds are accepted. I talked about this with my Aunt, and I think I’ve heard this analogy used in a sermon before as well; When you have a garden, you want the most bountiful, fruitful plants to grow, so you’ll weed it. But, if you don’t pull the weeds out by the root, they will grow right back up. We have to address this issue at the root, and not just settle for a few plus sized models featured here and there. Whether we like it or not, the media is one of the strongest influences in our minds so we need real change that will last – change  that will produce future generations of little girls who grow up feeling beautiful and strong in whatever shape or size body they are in.

I will probably write a second part to this piece on Body Image and Self Love, so stay tuned. It’ll be more directed at the self love portion though. What do you think about the changes you do or don’t see in the fashion industry? How have you been affected? What would you like to stay the same, or to be different? Let me know in the comments!

Here is the article by Amanda Mull that I referenced, she writes a much more thorough essay on the issue here: